If your home was built before the 1960s, chances are outdated plumbing material was used. Most drain pipe materials are supposed to last a long time, but your pipes may need urgent replacement due to elements out of your control.

In this article, we will go over signs you need drain pipe replacement, methods of replacement, and who you can call for the best service around.

Do you need drain pipe replacement?

If you notice any of the following signs, it’s likely time you need to replace your drain pipes.

There are different types of drain pipes used in the construction world. You may even know what material your home was built with.

Clay Pipes – Made of clay and water, clay was the material of choice from the 1880s to the 1900s. They were durable and resistant to corrosion but were heavy, making them hard to transport.

Failure: Clay pipes are very prone to invading plant and tree roots. The pipe joints can leak if a blockage causes pressure to build up, thus collapsing the pipe. Clay breaks into big pieces, so once it breaks, soil pours in, which results in constant blockages and potential backups(a sewer failure). Plant roots work their way into the joints and cling to the outer surface of the pipe. In some soils, the pipe can shift and sag, come apart, or crumble.

Cast Iron Pipes – Cast iron pipes have been used since the early 1800s for water distribution. Quality cast iron pipes can last 75-100 years and most homes built before the 1970s are equipped with them.

Failure: Cast iron, like all metal, rusts when exposed to water and oxygen. So with sewer pipes, those variables are unavoidable without proper maintenance. Shifting soils, tree roots, and especially chemicals like drain cleaner can damage them over time. We have seen failure in as little as 25 years. Coastal regions with high salt content also accelerate corrosion. 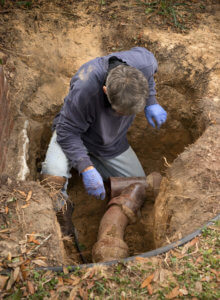 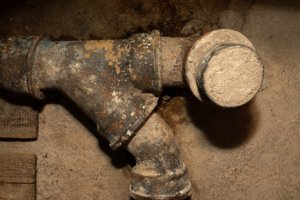 Orangeburg Pipe (Fiber Conduit) – Orangeburg pipes are made of wood pulp and pitch. Builders used them because they were cheap, easy to cut, and weighed less than clay pipes. They were a common material during the late 1930s.

Failure: Said to last as long as 50 years, they are known to fail in fewer than ten years. In some places, they are no longer considered acceptable material. They are made of wood fibers that can easily warp, collapse, and become targets for tree roots. Some methods of cleaning pipes, such as Hydro-jetting, can damage or destroy Orangeburg.

PVC (Polyvinyl Chloride) – In the early 1970s, plastic drainpipes became the best choice for new sewer lines and repair. They’re simple to install, cheap, and easy to transport. They fit tighter, and tree roots rarely get into the joints.

Failure: Nothing is perfect, and that could include the installation process. If PVC is not installed correctly or the joints are not glued perfectly, the pipes can fail. Underground debris and rocks can lead to friction, which in turn can damage the PVC pipe. PVC does have a breaking point despite being flexible. 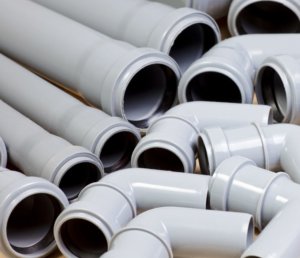 Just like the name implies, this is a drain pipe replacement process that involves no trenching and minimal digging. Trenchless sewer repair only requires one or two access points, often 4×4 pits on either side of the house. Or we can make the access point by pulling a toilet (we will put it back). Sometimes, some concrete needs to be chipped away under the toilet, but this is better than the alternative, a big ugly trench through your living room and kitchen. The collateral damage of trenchless drain pipe replacement is nothing compared to the effects of traditional methods. Trenchless sewer repair always begins with hydro-jetting or another pipe cleaning solution.

Trenchless sewer repair is broken up into two subtypes,

Sometimes a drain pipe is so severely damaged that no trenchless method is viable. Plumbers cannot use trenchless technology on pipes that are back-pitched, which means that the original contractors failed to use the proper slope for your sewer line to your city connection. If the pipe has collapsed onto itself, we will also have to go this route. Conventional sewer repair quotes will be lower than trenchless, but it does not include the cost to clean up the mess and repair the property damage

Who do you call for drain pipe replacement?

If you’re looking for a reliable, professional company that can deal with drain pipe replacement, call New Flow Plumbing. We serve the Santa Clarita, Glendale, and the greater Los Angeles area. We will assess the situation using a CCTV sewer camera inspection and give you the best solution. Contact us today and receive a quote.